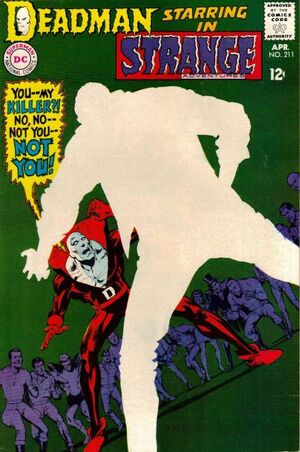 Appearing in "How Close To Me My Killer?"Edit

Synopsis for "How Close To Me My Killer?"Edit

Deadman follows the Hook's trail to El Campo, Mexico, where he is astonished to discover his twin brother Cleveland Brand is there, along with Cleve's daughter Lita. Unknown to Lita, her father is making extra money by helping wealthy Texas rancher Alf Jackson illegally ferry cheap labor across the Rio Grande. When U.S. and Mexican authorities learn of the operation, Jackson orders Cleve and his aide Orry Kane to take the unsuspecting laborers back to the Rio Grande and sink the boats, drowning them and thus removing any evidence of Jackson's wrongdoing. At first, Cleveland agrees, but, when he is on the Rio Grande, he finds himself unable to commit such a crime. Deadman then enters Cleve's body and helps him and the Mexicans defeat Kane and Jackson's gangsters. Later, Cleve tells Lita he only wishes Boston could see him now. Deadman, hovering invisibly over him, remarks that Cleve would be surprised...but that he still has not located the Hook.

Appearing in "Earth Victory -- By A Hair!"Edit

Synopsis for "Earth Victory -- By A Hair!"Edit

Howard Parker recalls the tale of the blond hair on display at the Space Museum to his son, Tommy. It seems the hair belonged to Admiral "Blondy" Gordon who along with General "Wrecker" Parker thwarted an alien invasion on a distant planet colonized by humans. "Wrecker" used the hair as a replacement crosshair in his damaged "snoopergun" and was able to destroy the alien's mind machine that was controlling the colonists thus enabling the Space Marines to liberate the planet. Young Tommy then realizes that "Blondy" was actually his mother, Ann Gordon, and the "Wrecker", is his father, Howard. He has been listening to the secret of his parents marriage.

Retrieved from "https://heykidscomics.fandom.com/wiki/Strange_Adventures_Vol_1_211?oldid=1459151"
Community content is available under CC-BY-SA unless otherwise noted.