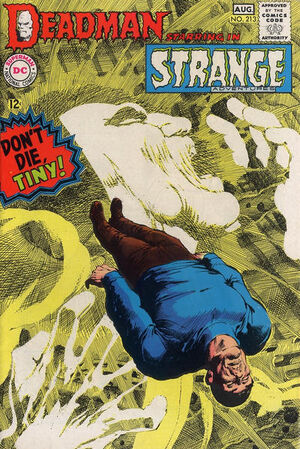 Yaa-Hooo! That's what I call a freak-out, pop!

Appearing in "The Call From Beyond!"Edit

Synopsis for "The Call From Beyond!"Edit

When he learns that Tiny has not been killed, only seriously wounded, Deadman inhabits his body and merges with the deepest part of his being in order to enable him to fight back from the very edge of death. Vashnu sits by Tiny's bedside and prays for his recovery. Tiny's surgeon, Dr. Shasti, is also from India and recognizes Vashnu as a famous mystic. Vashnu's presence and Tiny's miraculous recovery convince Dr. Shasti that the supernatural is involved...which, ironically, it is. Dr. Shasti is also involved in psychic research and is attempting to get grant money for a group of "researchers" who, unknown to Dr. Shasti, are fakes. Deadman investigates and helps Dr. Shasti and his son expose the phony medium Madam Pegeen and her gang. With his job done, Deadman wonders how to take up the trail of the Hook again.

Astronaut Kirk Haggard is testing a teleportation chamber when the beam from the teleporter collides with an incoming beam from a hostile alien resulting in both Haggard and the alien "merging" their body parts and abilities. When they realize they are unable to harm each other due to their current states, the alien announces his plans to undo the changes by reaching the humans teleportation chamber thus enabling the alien to complete his mission to destroy the Earth, that is unless astronaut Kirk Haggard can get there first.

Retrieved from "https://heykidscomics.fandom.com/wiki/Strange_Adventures_Vol_1_213?oldid=1459153"
Community content is available under CC-BY-SA unless otherwise noted.