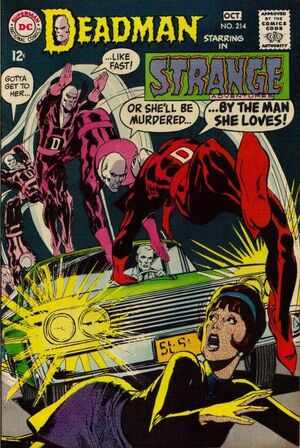 I'm a dead man standing in the shoes of a dead man! That makes me twice dead!

Appearing in "To Haunt A Killer"Edit

Synopsis for "To Haunt A Killer"Edit

Deadman encounters an engaged couple, Ruth and Phil, watching a circus performance in Madison Square Garden. He takes over Phil's body for a while, intending to abandon his quest and enjoy human life again. However, he gives up the effort after a few days and exits Phil's body, and, to his horror, sees Phil coldly gun down Fred Ames, a man the Mob has marked for death. Deadman soon learns that Phil, unknown to Ruth, is a professional killer. To bring him to justice, Deadman takes over the body of Fred Ames's father, a "man of 1,000 faces", and uses makeup to impersonate Fred Ames. He appears again and again in Phil's sight, until goading him into attempting murder again in the presence of police. After Ames is apprehended, one "officer" takes Phil aside and kills him, quickly shedding his disguise and getting away.

Retrieved from "https://heykidscomics.fandom.com/wiki/Strange_Adventures_Vol_1_214?oldid=1459154"
Community content is available under CC-BY-SA unless otherwise noted.