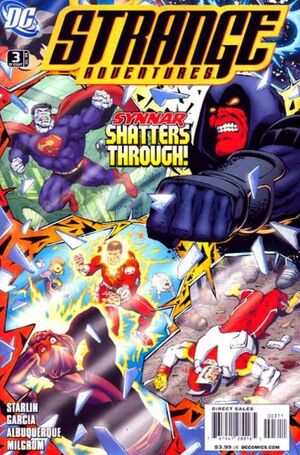 I was in the Midst of Transitioning, Eye, from the Material to a state of Ethereal Being. I had allowed the Weird to disincorporate me and was...

From www.DCComics.com: Comet and Eye have to deal with a very different and dangerous version of The Weird while Adam Strange travels to Hardcore Station only to discover that the space city holds unexpected perils. Bizarro also arrives at Hardcore and finds it most unwelcoming

Retrieved from "https://heykidscomics.fandom.com/wiki/Strange_Adventures_Vol_3_3?oldid=1459191"
Community content is available under CC-BY-SA unless otherwise noted.