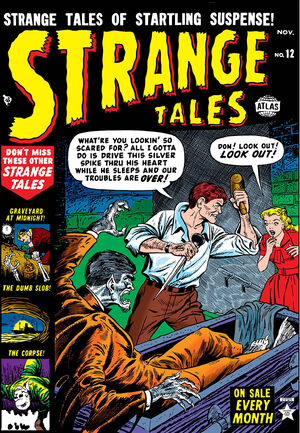 He was a man of a thousand faces---and his greatest public performance was in a---GRAVEYARD AT MIDNIGHT!

-- From the splash page of "Graveyard at Midnight"

A chemist mixes up a love potion but leaves it too close to the guinea pig cage and they drink it all.

A murderer is being sought by the police for a killing that he did not commit so he drives to his girlfriend who can provide an alibi. On the way over he strikes someone crossing the street in the dark and does not stop. He returns to the scene after police have showed out of curiosity and they tell him he's wanted in connection with a recent murder. He tells them that his girlfriend can account for his whereabouts but they tell him that she can't speak up for him since she was just killed by a hit and run driver.

A man considers a criminal career until his dead brother dissuades him.

Appearing in "The Dumb Slob!"Edit

Synopsis for "The Dumb Slob!"Edit

Sailors make fun of a dumb person the captain picked up in port to do free labor until he tells them that he sees the edge of the ocean and warns them not to go over. They put him in a rowboat and tell him to return so that he can warn others. The story ends with their ship falling off the edge of the ocean.

Appearing in "Graveyard At Midnight!"Edit

Synopsis for "Graveyard At Midnight!"Edit

An actor robs a bank in disguise and then kills his manager in the cemetery for trying to blackmail him. The caretaker sees the murder and phones the police. The police show up at the playhouse looking for the actor and he stays in the shadows so he can overhear them. He realizes that the cemetery caretaker saw him so he plans to murder the caretaker and disguise himself as his victim until the heat dies down. His plan would have worked, but the police leap to the erroneous conclusion that the caretaker is the killer who killed both the actor and his manager. The police shoot him when he attempts to confess that he is the actor.

Retrieved from "https://heykidscomics.fandom.com/wiki/Strange_Tales_Vol_1_12?oldid=1454570"
Community content is available under CC-BY-SA unless otherwise noted.