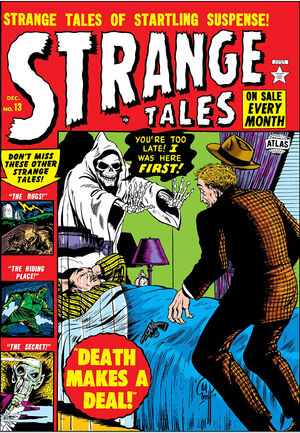 He was an actor, as handsome as an angel...but his secret was the devil's own!

-- From the splash page of "The Secret of Christopher Morse"

Appearing in "The Witching Hours!"Edit

Synopsis for "The Witching Hours!"Edit

A man marries the beautiful daughter of a witch. After he clouts her over the head, she tells him "Now that we're married, you'll have to stop being so mean to mother."

Appearing in "Death Makes a Deal!"Edit

Synopsis for "Death Makes a Deal!"Edit

Frank Kane, a washed-up reporter, is in serious danger of being fired, but he spends most of his time in bars instead of looking for stories. Finally, desperate for a scoop, he plans to manufacture one by murdering his own editor, and he runs into Death himself, who is waiting to collect the editor's body. In order to prove that he's the legitimate article, Death predicts that there'll be a bombing in the financial district the next day. Frightened, Kane leaves without killing the editor or investigating Death's claims, but the bombing really does occur the next day. Death then returns to Kane and predicts the suicide of a movie star. This time, Kane writes up the suicide story and sends it to his paper--and, again, the suicide occurs. After receiving several more predictions from Death, Kane becomes a huge success as a reporter, but he's still not satisfied because he wants to be the paper's editor. To his excitement, Death appears to him and predicts that the editor will soon jump out of the office window. Kane rushes back to the office, only to find that the previous editor has retired and he has been appointed as the next editor! As the figure of Death advances on him, he is forced back towards the window...

Appearing in "The Hiding Place"Edit

Synopsis for "The Hiding Place"Edit

Three thugs rob a bank and hide the loot by dropping it into a deep pool in an old rock quarry. One of them, Nick Anson, is worried that his partners will either give themselves up to the cops or try to retrieve the money for themselves, but eventually he becomes convinced that his pals wouldn't do that to him. After much deliberation, Nick decides that he's going to cut out his buddies and take the money for himself, so he goes out to the quarry and dives into the pool, but he gets stuck between some boulders before he can get the money. As he's drowning, he sees the bodies of his friends, trapped in exactly the same way.

Alien scientists are disgusted when they look at the humans they have collected from Earth under their microscopes and recommend that the small planet be destroyed.

Appearing in "The Secret of Christopher Morse"Edit

Synopsis for "The Secret of Christopher Morse"Edit

Christopher Morse is a stage actor who is billed as "The Handsomest Man in the World," but lately his plays have been unable to find success. The only thing his agent can offer him is the role of a disfigured villain in a horror story. He initially refuses, but he later reconsiders because he is eager to marry his fiancee and the couple needs money to start a home together. He accepts the role on the condition that he be allowed to do his own makeup, and audiences are fascinated by the horrible face of his character. Later, at her apartment, his fiancee spills coffee all over his face, and she sees something which causes her to scream horribly. When the neighbors break into the apartment, they find that Morse has killed her and then committed suicide. It turns out that the horrible face of his character in the horror play was actually his own face, and the "handsome" face was mere makeup.

Retrieved from "https://heykidscomics.fandom.com/wiki/Strange_Tales_Vol_1_13?oldid=1454571"
Community content is available under CC-BY-SA unless otherwise noted.