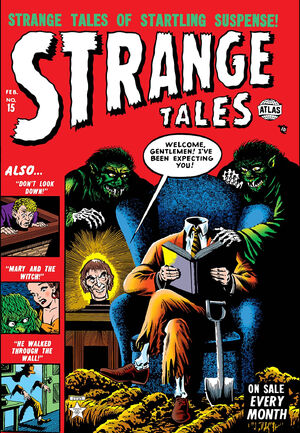 What happened to Wilbur should only happen to a dog! No, we take that back...a dog doesn't deserve it, but Wilbur did, especially when his wife had..."THE LAST WORD"

-- From the splash page of "The Last Word"

Appearing in "Mary and the Witch!"Edit

Synopsis for "Mary and the Witch!"Edit

A woman who used to act on the stage is impressed with a magician's ability to seem to perform real magic. She pretends to be interested in him until he takes her to meet his mother, who he claims is a witch and the true source of his power. The old woman sees through the girl and refuses to divulge any secrets. When the witch goes into town, the actress uses her makeup skills to disguise herself as the witch so that she can influence the magician to tell her the secrets. The townsfolk have decided that they've had enough of a witch living in their midst, so they seize her and burn her at the stake.

Appearing in "The Last Word"Edit

Synopsis for "The Last Word"Edit

A man cheats on his wife until she cuts him off. When his lover admits she only paid attention to him for his money, he loses his temper and kills her. He begs his wife for money so he can leave the country but she doesn't respond. The police come and he confesses, figuring that they tracked him, but it turns out the butler called the police since his wife has passed away sitting in her chair.

A man has a perception of being at great heights when he is only sitting on furniture. A psychologist attempts to cure him by tipping over his chair, but the fall shatters his body.

A story about Frankenstein's monster spooking himself by reading his favorite horror literature.

Appearing in "He Walked Through the Wall"Edit

Synopsis for "He Walked Through the Wall"Edit

A crook steals a scientist's salve which allows the molecules of his body to pass through walls but it wears off as he is passing through the bank's wall.

Retrieved from "https://heykidscomics.fandom.com/wiki/Strange_Tales_Vol_1_15?oldid=1454573"
Community content is available under CC-BY-SA unless otherwise noted.