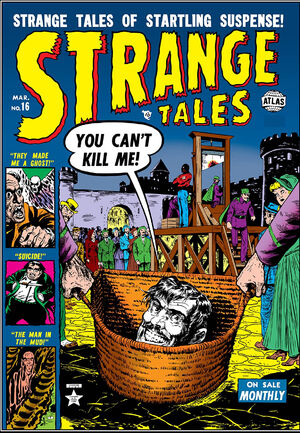 It is the morning of September the third in the year 1906! The notorious French criminal Henri Lebret is about to be guillotined, but as the blade descends, he laughs...why?

Appearing in "You Can't Kill Me!"Edit

Synopsis for "You Can't Kill Me!"Edit

A scientist develops a method of reattaching severed heads, but when his beloved daughter makes him promise to reattach the head of an executed killer she wishes to marry, he puts the man's head back on upside down to save her from herself.

Appearing in "The Man In the Mud"Edit

Synopsis for "The Man In the Mud"Edit

Marty, a pickpocket, always gets kicked out of fancy restaurants when he tries to trick the proprietors into giving him food. He thinks it's his lucky day when he steals a man's wallet and finds over $800 inside, so he buys a fancy suit of clothes and waltzes into a nice restaurant. The waiters recognize him and get suspicious, so he decides to show them that he really does have the money...but he finds out that his pocket's been picked!

Stephen, a scrawny kid, lives with his cruel aunt who never lets him do anything he wants to do, so he buys a spell-book from a "Black Magic Shoppe" and uses it to turn her into a frog.

Jenks, a bum who thinks he has no future in life, makes two suicide attempts, but fails in both of them. When he returns home, he meets a lawyer who announces that his rich uncle has just died and he's inherited a million dollars. However, when he rushes out to celebrate, he falls down the stairs and breaks his neck.

Appearing in "They Made Me A Ghost!"Edit

Synopsis for "They Made Me A Ghost!"Edit

A condemned man makes a deal with Satan to be made a ghost so that he can haunt the judge responsible for his sentence. As a ghost, he finds himself unable to affect the physical world and the wind eventually blows him out into the void of space where he drifts for eternity.

Retrieved from "https://heykidscomics.fandom.com/wiki/Strange_Tales_Vol_1_16?oldid=1454574"
Community content is available under CC-BY-SA unless otherwise noted.