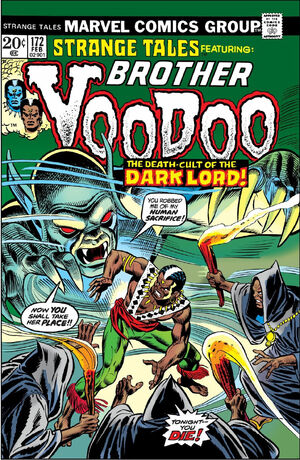 Appearing in "Fiend in the Fog"Edit

Synopsis for "Fiend in the Fog"Edit

Outside his home in New Orleans, Brother Voodoo spots a young girl being swept away in the Mississippi River. Diving into the water, Voodoo manages to save the girl and bring her back to his home. There he learns that she is Loralee Tate, daughter of Samuel Tate the local chief of police. She tells Brother Voodoo that she has been stalked by a group called the Cult of the Darklord. At first they mailed her a package with a black rooster inside and a note telling her that they intend for her to be their next victim in a series of missing women in the area.

That night as she was driving home, she was confronted by the cult, however as she tried to get away a strange mist appeared and formed into the face of a demon. Trying to avoid driving into it's maw, she swerved and her car ended up going off the road and into the Mississippi where she managed to get free from her car but got swept away.

While waiting for her father to arrive, the Cult of the Darklord arrives at Voodoo's house and attacks. They manage to knock Voodoo out and capture the girl and flee into the night. When Samuel Tate arrives, Brother Voodoo has to explain the predicament to him. Brother Voodoo then tries to convince Tate and his colleague detective Pete Hawkins to let him deal with the cult alone. When they refuse, and later try to arrest him, Voodoo flees into the night to and rescue the girl.

Meanwhile, at the secret home of the Cult of the Darklord, Loralee is being dragged off to the ceremonial room where she is to be sacrificed.

Retrieved from "https://heykidscomics.fandom.com/wiki/Strange_Tales_Vol_1_172?oldid=1454730"
Community content is available under CC-BY-SA unless otherwise noted.