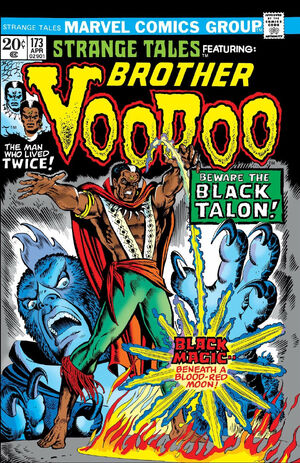 Continued from last issue.... To aid in his mission to try and find Loralee Tate, Brother Voodoo pays a visit to an old woman named Mama Limbo who apparently has clairvoyant abilities. Her visions tell him to go and seek out Desmond Drew, who she believes has a connection to the Cult of the Darklord.

As Brother Voodoo goes to check out this lead, at the police station Samuel Tate and Pete Hawkins debate on what to do about Samuel's missing daughter. They finally decide that Brother Voodoo would hamper their efforts to find her themselves and put out an APB to have him arrested on sight.

Voodoo would find himself at Drew's house where (after quelling his guard dogs with his voodoo powers) is told by Desmond that he has nothing to do with the Cult. Brother Voodoo has reason to believe him and departs.

However, as he does leave he's visited by the same spectral mist seen by Loralee before she was kidnapped. He bounds back over into Drew's property where he's attacked by members of the Cult. Although he has the upper hand to begin with, he's ultimately knocked out and taken prisoner. When he revives he finds himself tied to an inverted cross directly over Loralee who is intended to be sacrificed. After assessing the situation, Brother Voodoo witnesses the entrance of the cults apparent leader, a costumed man named the Black Talon.

This story is continued in Tales of the Zombie #6...

reprinted from World of Suspense #4

Retrieved from "https://heykidscomics.fandom.com/wiki/Strange_Tales_Vol_1_173?oldid=1454731"
Community content is available under CC-BY-SA unless otherwise noted.