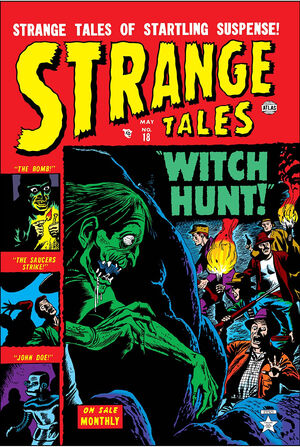 What happens when something goes wrong during an H-bomb test? When the bomb-button touches off nothing but an hour of horrifying suspense?!

-- From the splash page of "Boris and the Bomb!"

A criminal attempts to steal an inventor's robot so that he can sell it, but when he attempts to rub out the inventor's daughter, the robot attacks and kills him.

Appearing in "The Saucers Strike!"Edit

Synopsis for "The Saucers Strike!"Edit

An armada of flying saucers invades Earth, but makes one crucial mistake--due to an error by their scanners, they believe that human beings are composed of an advanced form of metal. With their weapons keyed to destroy metal objects, they strike terror into the hearts of humans by destroying army tanks and other metal devices, but a hick farmer figures out their weakness when he single-handedly attacks them and finds that their weapons can't affect him. Also, in the different atmosphere of Earth, the aliens can be killed by a single punch. The alien army leaves, and the farmer is hailed as a hero (to his annoyance, because the celebrating mob is stepping on his crops).

The devil is annoyed with a do-gooder who drives away his witches so he assumes the guise of an official of the kingdom and has her sent to the stake.

Appearing in "Boris and the Bomb!"Edit

Synopsis for "Boris and the Bomb!"Edit

A Russian atomic scientist gets revenge upon the communists who killed his family by making the first soviet hydrogen bomb appear to be a dud until they come within range and then he ignites it.

Retrieved from "https://heykidscomics.fandom.com/wiki/Strange_Tales_Vol_1_18?oldid=1454576"
Community content is available under CC-BY-SA unless otherwise noted.