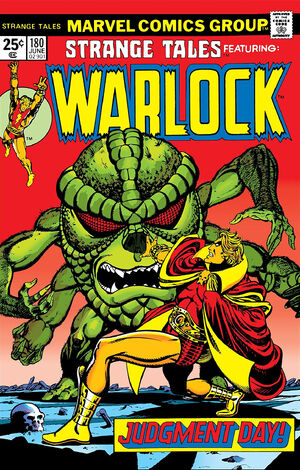 It's the... Soul Gem... it fights me... it's trying to... break free from my control... again! I can feel it... it wants to suck in... the Souls... of these fallen Knights... just like it did... to Autolycus... I can't allow this... to happen... not again! I did it! I've got it under control again! But it was so... so hard! I feared it might come to this! The Soul Gem is steadily growing stronger and shedding the Subconscious control I've had over it the last three Years! It seeks to be free to satisfy its unholy Hunger for fresh Souls to suck them out of living Beings! I wear a Fiend upon my Forehead... a Monster I now realize... I must destroy!

While battling a couple of the Black Knights the Soul Gem almost takes control again and Warlock decides, that he must destroy it, however as he takes it off Warlock collapses and realizes, that he can no longer exist without the Gem as it has been sucking out Warlock's Soul in the last three Years thus becoming his life force. The Matriarch wants to make a Slave out of Warlock now instead of killing him. After trying to remove the Gem Warlock is invited by the Matriarch to the Sacred Palace, an obvious trap, but since she claims, that she knew that the gem would become a danger even to Warlock himself, Warlock decides to accept the invitation and ditches Pip. The Matriarch reveals to Warlock, that the Magus is his future self and not a conjuring of the Soul Gem as he believes, at first he refuses to believe. Warlock falls through a trap door and lands in front of Kray-Tor for trial. Kray-Tor's statement makes it quite obvious that Warlock's trial is a sham, Warlock argues that he cannot be tried by this Court because it has its power from the Magus - thus from a part of Warlock himself gone mad, so he insists, that he be tried by the Magus himself - the motion is denied. The Prosecutor calls for a witness - a rebel and infidel, to Warlock's satisfaction the witness Yon-Lok doesn't blame him to be guilty of High Church Crimes but Kray-Tor and his Court, for this he gets killed and the Jury is ordered to ignore that statement, all other witnesses point to Warlock as the perpetrator of a dozen false crimes. As Warlock strongly objects he gets gagged and is sentenced to a Church-House of Correction, Warlock however resists and Kray-Tor reverses his ruling and sentences Warlock to death. Gamora finds Pip and tells him, that she wants to find out if Warlock can indeed defeat the Magus, if so she joins him and if not she will kill him. Warlock uses the Soul Gem to kill Kray-Tor saying, that he now knows, that the gem was sent to him by some higher power beyond his comprehension to destroy evil such as Kray-Tor, afterward Warlock knows Kray-Tor's thoughts and realizes, that he truly believed in what he was doing, truly believed that Warlock was threatening his beliefs and realizes, that by stealing Kray-Tor's Soul he truly became the villain.

Retrieved from "https://heykidscomics.fandom.com/wiki/Strange_Tales_Vol_1_180?oldid=1454738"
Community content is available under CC-BY-SA unless otherwise noted.