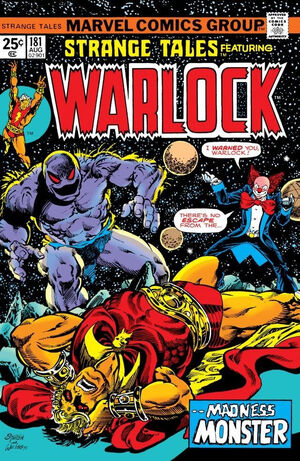 I go by many Names, my Tick-Ridden Troll, but I'm sure the one that Black Knight knew me by is Gamora, the deadliest Woman in the whole Galaxy!

Warlock finds himself in a strange place and considers, that this is just an illusion but decides, that he is in a Reality unlike any he has ever seen before, the Head Clown states, that Warlock has always been in this Reality, he has just never seen it in quite this manner before and calls it the "Land of the Way it was". A Technician states, that something is wrong with visual and audio programming. The Clowns are trying to reprogram Warlock and Beautiful Jan paints a Clown's Mask on Warlock's Face because all the dark aspects have to go. Gamora and Pip are on their way to rescue Warlock and interrogate one of the Black Knights and he is scared to death by Gamora. The Technicians realize, that Warlock is rebelling against the programming. Len takes Warlock to a Renegade Clown who is being punished, other Clowns are throwing cake at him and he is tied to a cross similar to that on which Warlock died on Counter-Earth. Warlock takes two cakes and punches them at two Clowns, one of the Technicians is outraged as Warlock has just knocked out two of his assistants, now Warlock is shown wearing a helmet so the Clowns are just a picture of his imagination, as Len Teans says because of his overly strong free will he sees them not as Heroes of the Church but as Clowns. The Matriarch wants the strategy changed, instead of threatening Warlock into seeing the Church's Way Teans should show him, that it would be harder to stand with the Church than against it because being a fool Warlock would easily be taken in by a challenge. Gamora and Pip are entering the Sacred Palace to free Warlock while Len Teans tell him, that there is only one way out - through the Door of Madness, after he crushes the door he is attacked by the Madness Monster. The Madness Monster is unaffected by the Soul Gem and Warlock realizes that the monster is part of his soul. By accepting that part of himself Warlock overcomes the input helmet and breaks free and, for the first time, sees himself face to face with the Magus.

Retrieved from "https://heykidscomics.fandom.com/wiki/Strange_Tales_Vol_1_181?oldid=1454739"
Community content is available under CC-BY-SA unless otherwise noted.