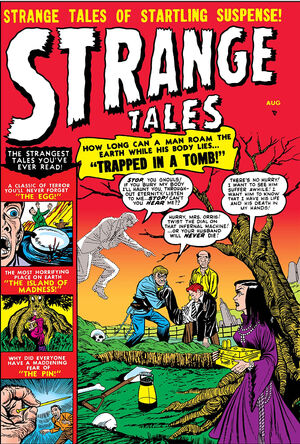 "If you see a pin, pick it up! It's supposed to bring good luck!"...So goes the saying! But the pin I picked up led to an adventure stranger than the weirdest fiction!

Aliens send eggs which disgorge a toxic substance when opened.

Appearing in "Trapped In the Tomb"Edit

Synopsis for "Trapped In the Tomb"Edit

A scientist invents a box which can teleport a person's spirit and loans it to a friend. The friend decides to kill his wife and use the box's ability to establish an alibi of being somewhere else at the moment of the crime, but his wife gets the idea first.

A scientist invents a serum which reduces age without affecting the mind. He finds himself an infant but he develops a transfer formula which he places in a pin in order to stick someone with the same blood type and steal their years.

Appearing in "The Island of Madness"Edit

Synopsis for "The Island of Madness"Edit

Two men and a woman find themselves stranded on an island that is supposed to be inhabited by a demon and one man is killed but it turns out that the woman is the monster.

Retrieved from "https://heykidscomics.fandom.com/wiki/Strange_Tales_Vol_1_2?oldid=1454560"
Community content is available under CC-BY-SA unless otherwise noted.