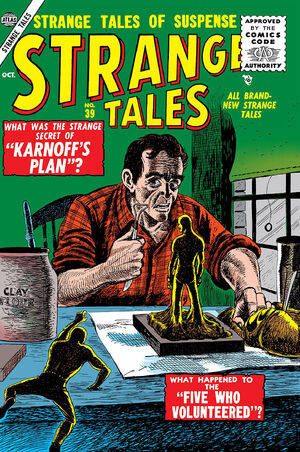 A Puppet Master type story but his material works on buildings as well as people. He meets his doom when his landlady sells his statue of himself along with other personal items for nonpayment of rent and the buyer tosses it in the trash.

This story is reminiscent of Alicia Master's first meeting with the Silver Surfer. A homely alien is going to recommend humans be destroyed to preserve the galactic peace when he saves a blind girl from being struck by a car. After she tells him she can sense his inner nobility he changes his recommendation to allow humans to develop their space-faring capability.

Appearing in "The Secret of the Ship"Edit

Synopsis for "The Secret of the Ship"Edit

A young boy who plays with toy ships loses his paper route job when he is late once too often. The family needs extra money because the father is home recovering from an illness. The boy thinks his ship has become lost, but after awhile it returns loaded with black pearls it has traded for at a distant port.

Appearing in "The Man Mountain!"Edit

Synopsis for "The Man Mountain!"Edit

A story that explains the circumstances of the old woman who had so many children she didn't know what to do came to live in a shoe.

Appearing in "Five Who Volunteered"Edit

Synopsis for "Five Who Volunteered"Edit

A tv producer of a candid-camera type show contacts an inventor who doesn't believe his rocket can fly to Venus. The producer says that's ok because he wants to advertise for five people who wish to leave Earth and film them being fooled by the fraud for the audience's amusement. The inventor agrees and is surprised when his rocket actually does succeed in reaching Venus, but not nearly as surprised as the producer and his film crew when the five recruits shape-shift into Venusians who are glad to be home.

Retrieved from "https://heykidscomics.fandom.com/wiki/Strange_Tales_Vol_1_39?oldid=1454597"
Community content is available under CC-BY-SA unless otherwise noted.