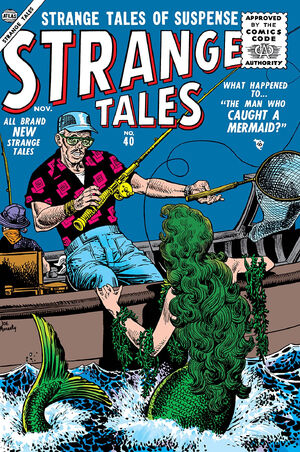 Appearing in "This Dark Cave"Edit

Synopsis for "This Dark Cave"Edit

A man returns to his shelter after he mistakes a small town that has been evacuated in service of atomic bomb tests for the worldwide war that he has feared would come.

Appearing in "A Stranger On Earth"Edit

Synopsis for "A Stranger On Earth"Edit

When an alien crash lands on Earth, he is met with violence by men, but is befriended and helped to return to his ship by a dog. From orbit he thinks about destroying the planet but realizes that would kill the dogs too and refrains from his plan.

Appearing in "The Man Who Caught a Mermaid!"Edit

Synopsis for "The Man Who Caught a Mermaid!"Edit

A man attempts to play a joke on a skeptical friend by hiring a girl with a mermaid costume to be dropped into the sea by a helicopter and then brought out of ocean with a net. The trick works on his friend and he tells his men to throw the girl back but the friend thinks he is mad to release such an amazing discovery. He lets the man know that he set the stunt up to fool him when one of his men tells him that the girl he had hired had become ill that day and never showed up for the prank.

Appearing in "The End of Time!"Edit

Synopsis for "The End of Time!"Edit

God intervenes directly to stop militarists from rushing towards war.

Appearing in "No Place To Hide!"Edit

Synopsis for "No Place To Hide!"Edit

A judge sentences a man to ninety days in the workhouse for vagrancy and finds himself back in time 300 years. He is pulled off the street because of his strange clothes and the judge thinks his family photograph and cigar lighter are examples of black magic. He escapes and finds himself back in the present. He has second thoughts about the sentence he has passed and releases the man he had charged the previous day.