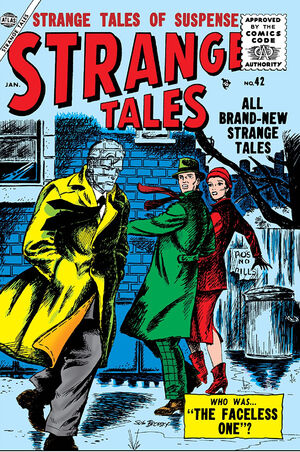 Appearing in "The Faceless One"Edit

Synopsis for "The Faceless One"Edit

A rich man disinherits his son because he wanted to be a magician but his companion of twelve years is unaware of this when he finds a photo of the son. The companion is angry that he will be cheated out of inheriting the money by the existence of a legal heir so when a magician knocks at the door and offers to exchange faces so that he looks like the heir he agrees to let the spell be cast upon him. The rich man dies and the will reveals the son has been disinherited and the magician, who looks like the companion that has inherited the money, admits to actually being the son.

Appearing in "The Man Who Said No"Edit

Synopsis for "The Man Who Said No"Edit

same story as "Not Wanted!" in Marvel Tales Vol 1 116 only with an ape instead of a dog.

An escaped mental patient from the moon visits Earth in his flying saucer before being taken back to his moon city.

Appearing in "The Vanishing Brain"Edit

Synopsis for "The Vanishing Brain"Edit

A professor walks through a "time flaw" and is enslaved by cave men. With all the work he is forced to do he becomes powerful and escapes. He returns to his own time only to find that the woman he was attracted to and belittled him for his puny body has married another weak professor.

Appearing in "The Man In the Cell"Edit

Synopsis for "The Man In the Cell"Edit

A reporter is arrested on suspicion of murdering his fighter pilot friend but what really happened is that the man pierced a dimensional veil on a test flight and met a girl he loved there so that he was able to use his mental energy to return to that place once he had landed the plane back on Earth and told the story to his reporter friend.

Retrieved from "https://heykidscomics.fandom.com/wiki/Strange_Tales_Vol_1_42?oldid=1454600"
Community content is available under CC-BY-SA unless otherwise noted.