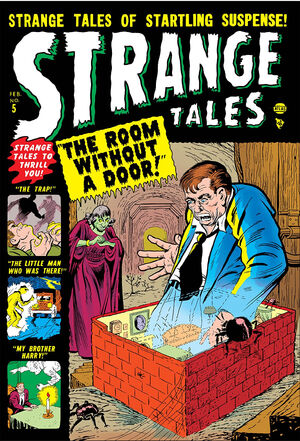 Every place that Dennis Ames went...a strange little creature followed him like a shadow! Dennis ran...Dennis hid...but it was no use...there was no escape from..."THE LITTLE MAN WHO WAS THERE"

-- From the splash page of "The Little Man Who Was There"

Appearing in "The Room Without a Door"Edit

Synopsis for "The Room Without a Door"Edit

A scientist rejects science as useless for discovering the secret of time travel and turns to black magic instead. When he hears of a woman related to a witch burned in 1692 living nearby, he spies on her through a window and sees her summon the ghost of her ancestor. She confirms to the ghost that only she can travel through time by means of 'the room without a door.' The scientist gets the witch evicted and buys the house so that he can search for this room. At first he is unsuccessful, until he finds a small box with wallpaper made to resemble a room. He breaks the box open and finds himself transported back to 1692 tied to a burning stake.

Appearing in "The Little Man Who Was There"Edit

Synopsis for "The Little Man Who Was There"Edit

A similar plot to The Twilight Zone's "The Hitchhiker." While fighting in Korea, Capt. Dennis Ames sees a strange little man in his shellhole just before it is hit by a bomb. After recovering from his injuries, Dennis sees the same little man everywhere he goes--as a gardener at the hospital, as a train conductor, and as a roadside hitchhiker. Finally, Dennis is critically injured in a car accident, and he sees the little man--apparently a personification of Death--as a doctor administering ether to him.

When a man's plane explodes he is thrown into the future to view his act of killing his new boss and then being executed.

Appearing in "My Brother Harry"Edit

Synopsis for "My Brother Harry"Edit

A man's brother claims to be able to talk to his dead mother which annoys him, so he beats him. His wife is tired of his cruelty and poisons him. He thinks that he has survived the attempt to murder him, but when he arrives home to kill her and blame it on his brother, she ignores him and only his brother speaks to him as "I see all dead people, don't I, Philip?"

Retrieved from "https://heykidscomics.fandom.com/wiki/Strange_Tales_Vol_1_5?oldid=1454563"
Community content is available under CC-BY-SA unless otherwise noted.