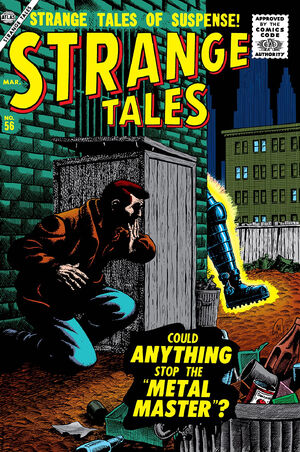 Appearing in "Something Is On This Ship!"Edit

Synopsis for "Something Is On This Ship!"Edit

Appearing in "The Metal Master!"Edit

Synopsis for "The Metal Master!"Edit

An artist creates a robot to paint for him but smashes it when it turns the tables and forces him to paint.

Appearing in "More Than A Mortal!"Edit

Synopsis for "More Than A Mortal!"Edit

A man with a theory that Shakespeare was more than mortal murders his uncle for his money, but Shakespeare's ghost contrives to make him own up to the crime.

An owner of criminal hide-outs comes across a wishing jewel that he uses to eliminate his competition but when he gets raided by the police he realizes that there is no where to run because his competitors have all been put out of business.

Appearing in "Nothing Can Stop It"Edit

Synopsis for "Nothing Can Stop It"Edit

A chemist tries to make a solvent that can eat through anything for criminal purposes but when succeeds, he realizes that he failed to consider nothing could contain such a compound.

A deadbeat finds that when his foot makes contact with a power cord and he touches the radiator the shock he receives teleports him to distant towns at random. He decides to use this to steal the company payroll, but with the police right behind him, he doesn't get the shock from the radiator. He realizes one of the bills he hasn't paid is from the electric company.

Retrieved from "https://heykidscomics.fandom.com/wiki/Strange_Tales_Vol_1_56?oldid=1454614"
Community content is available under CC-BY-SA unless otherwise noted.