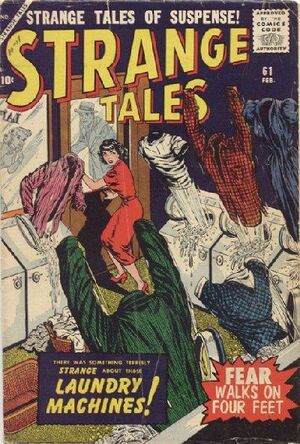 Appearing in "The Laundry Machines!"Edit

Synopsis for "The Laundry Machines!"Edit

A woman from Haiti puts a voodoo doll of the laundry mat owner inside a washer to make him feel uncomfortable when he raises the rent on her.

A racecar driver quits racing when he sees a spectre appear on the tracks. His manager takes him to a mystic and the mystic gives him a crystal ball imprisoning the spectre so he can get behind the wheel again. He sees the spectre out on the track and is almost killed. His manager tells him the crystal ball is sitting on a shelf, but when he leads the driver to it, they find that the ball has fallen off and shattered.

Appearing in "The Disappearing Man!"Edit

Synopsis for "The Disappearing Man!"Edit

A scientist builds a machine that lets him travel into another dimension where he sets himself up as ruler. He doesn't trust other humans to rule benevolently, so he makes a rule before he returns to Earth that any stranger must be imprisoned until he can speak with him. It turns out his suspicions were correct, for one of his acquaintances attempts to travel to the other world and set himself up as despot wrecking the machine after him. The scientist laughs because he knows that it will take him at least ten years to construct another machine.

Appearing in "Menace of the Mirror"Edit

Synopsis for "Menace of the Mirror"Edit

A man attempts to cheat his partner by turning up the power on his invention to paralyze animals in order to make the test fail. When the smoke clears, he finds himself pursued by a dinosaur. He assumes that he had been thrown into the past, but what actually happened was that the rays from the machine had hatched a dinosaur egg and rapidly matured it. While he spent a year scavenging for survival in the jungle hoping the effect would wear off and he would return to the present, his partner married the girl they both wanted and exhibited the dinosaur to make himself wealthy.

Appearing in "The Eyes That Never Close"Edit

Synopsis for "The Eyes That Never Close"Edit

Two cons in a cell come into contact with a Monkey's Paw-like item that will grant three voyages to those of like character. Good people get good voyages and bad people get bad ones. The convict who originally possessed the idol warns the other that it is dangerous and he won't be able to return to the cell from the third voyage, but he wants to chance it to get out of prison. His first voyage is the Titanic and his second is the Hindenburg. He ignores the warning and fades out of the cell for the last time. He finds himself arrested by Asian men and locked in a cell for the duration of the war. He asks the soldiers the name of the town and finds that it is...Hiroshima.

Retrieved from "https://heykidscomics.fandom.com/wiki/Strange_Tales_Vol_1_61?oldid=1454619"
Community content is available under CC-BY-SA unless otherwise noted.