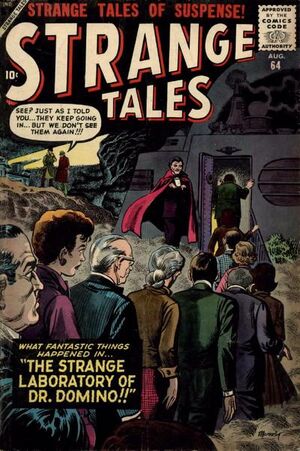 Appearing in "The Secret Laboratory of Dr. Domino"Edit

Synopsis for "The Secret Laboratory of Dr. Domino"Edit

A conman hires some elderly women and young girls to enter a cabinet so that the old woman exit the back and the young girls come out the front to give the illusion that their youth has been restored. The old women in the audience throw money at the man who promises them their youth back. A sorceress appears who wants the treatment and he admits that he is a fraud. The sorceress ages him.

Appearing in "What Is Monium?"Edit

Synopsis for "What Is Monium?"Edit

A man discovers a metal that when cut in two remains connected even though it appears that there is empty space between the parts. He fashions two hoops and starts a magic act where anything he tosses through the one hoop pops out the other no matter how far away from each other they are. His assistant threatens him into criminal acts. The assistant robs jewels and throws them into the hoop so that the man at the other end must collect the loot. When the thief gives the man a hammer and wood to construct a crate to hold all of the loot, he places the hoop inside the crate and breaks down the door he had been imprisoned behind. He confronts the thief and the thief attempts to escape through his hoop but finds himself inside the sealed crate on the way to the penitentiary.

Appearing in "So This Is Mars!"Edit

Synopsis for "So This Is Mars!"Edit

A Martian filmmaker teleports a human filmmaker's Martian set to Mars and is disappointed to find human culture identical to Martian culture.

Appearing in "The Silent City!"Edit

Synopsis for "The Silent City!"Edit

A man finds that he can rob helpless frozen people if he stops all of the clocks in town but he forgets about a sundial.

Appearing in "What On Earth?"Edit

Synopsis for "What On Earth?"Edit

When people embrace love they find themselves automatically teleporting to other planets.

Appearing in "The Last Warning!"Edit

Synopsis for "The Last Warning!"Edit

A man saves his own life by sending a radio message through time that helps a younger version of himself escape a cave-in.

Retrieved from "https://heykidscomics.fandom.com/wiki/Strange_Tales_Vol_1_64?oldid=1454622"
Community content is available under CC-BY-SA unless otherwise noted.