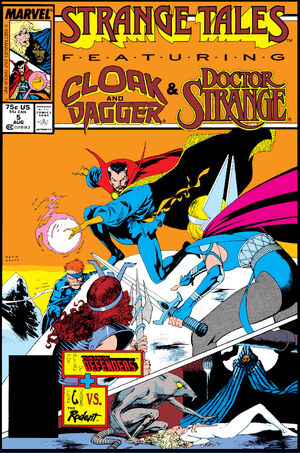 Cloak and Dagger confront the monstrous child-snatcher known as Vermin.

Appearing in "The Snows of Yester-Year"Edit

Synopsis for "The Snows of Yester-Year"Edit

Doctor Strange's efforts to harness the black magic he has unleashed in himself are dangerously threatened when he is attacked by his one-time friend, Valkyrie and her New Defenders.

Retrieved from "https://heykidscomics.fandom.com/wiki/Strange_Tales_Vol_2_5?oldid=1454751"
Community content is available under CC-BY-SA unless otherwise noted.