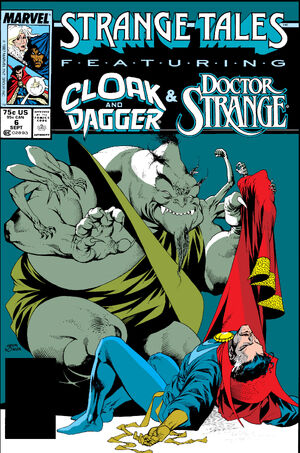 Cloak and Dagger eavesdrop on a girl's confession in an abandoned church and become swept up in a rescue attempt that threatens to tear their relationship apart.

Doctor Strange, convinced he is no longer worthy to wear the mystic Orb of Agamotto, seeks renewal in the Tibetan sanctuary of his long-dead mentor the Ancient One only to discover that the remote, deserted retreat is occupied by a woman possessing a portentous secret!

Retrieved from "https://heykidscomics.fandom.com/wiki/Strange_Tales_Vol_2_6?oldid=1454752"
Community content is available under CC-BY-SA unless otherwise noted.