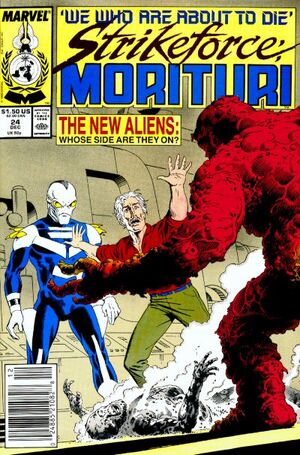 As if mankind's war against the alien Horde wasn't bad enough, now their Morituri force must face the appearance of two new alien races! And to make matters worse, one of those aliens promises to make the Morituri more dangerous to mankind than the Horde!

Retrieved from "https://heykidscomics.fandom.com/wiki/Strikeforce_Morituri_Vol_1_24?oldid=1454813"
Community content is available under CC-BY-SA unless otherwise noted.