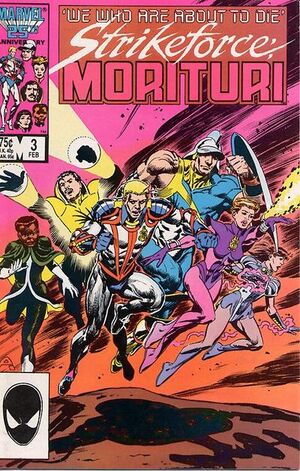 Appearing in "Paths of Glory"Edit

The moment of truth for Strikeforce: Morituri has arrived. The team's powers are at their peak. Now it is time to fight and defend Earth from the alien invaders. Is the Strikeforce taking the road to an immediate death or will the trail prove to be "The Path to Glory"?

Retrieved from "https://heykidscomics.fandom.com/wiki/Strikeforce_Morituri_Vol_1_3?oldid=1454792"
Community content is available under CC-BY-SA unless otherwise noted.