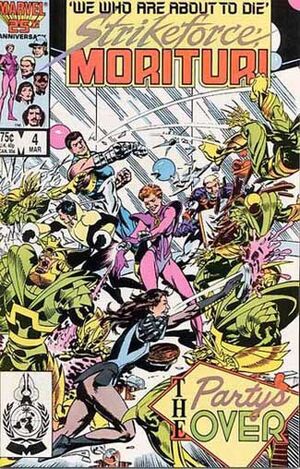 Fame glorifies the Strikeforce when a dramatic comic book of their adventures is released and a Strikeforce television program is announced! But the invading alien Horde has its own death-dealing plans for the star-studded hoopla— which results in the Strikeforce's first death!

Retrieved from "https://heykidscomics.fandom.com/wiki/Strikeforce_Morituri_Vol_1_4?oldid=1454793"
Community content is available under CC-BY-SA unless otherwise noted.