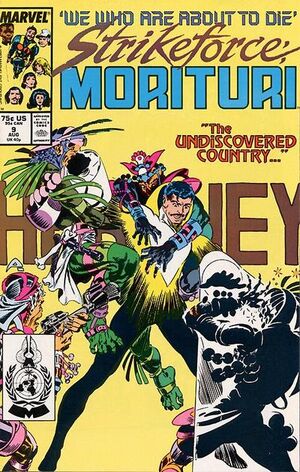 Appearing in "The Undiscovered Country"Edit

With Mankind's war against the invading alien Horde at a stalemate, a lost member of Earth's super heroic Strikeforce: Morituri discovers a secret that could destroy the group's loyalty to humanity! The aliens' Grand Inquisitor the Gentle Inquirer possesses a cure for the fatal side-effects of the Morituri process, and he's got proof that it works— a surviving member of Morituri's predecessors, the Black Watch!

Retrieved from "https://heykidscomics.fandom.com/wiki/Strikeforce_Morituri_Vol_1_9?oldid=1454798"
Community content is available under CC-BY-SA unless otherwise noted.