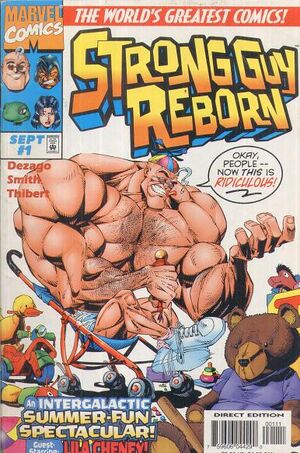 Appearing in "The Heart of the Matter"Edit

Synopsis for "The Heart of the Matter"Edit

The Jorken/Kront War had been raging on for 6 millennia. They are fighting over the virgin moon Yordel, a desolate worthless hunk of rock that both sides only wanted because the other side did too. Both sides came up with exactly the same plan, capture Lila Cheney to swing the war in their favor using her teleportation powers.

Lila and Strong Guy are visiting the shore of Long Island, Strong Guy recaps his recent events, including his death to Lila using extremely realistic flashback/sand sculptures, when suddenly, the Jorkens open a portal right behind them and kidnap Lila while she is trying to win him back as her bodyguard.

Lila is brought to the throne room on the Jorken mothership and they try to get her to teleport a Dylaxian Bomb onto the mothership of the Krond to end the war.

Lila refuses and teleports away calling them idiots for thinking they could kidnap a teleporter. Back at the beach where Lila reappears, telling Strong Guy that kidnappings like this are exactly why she needs him as her bodyguard again. Guido is reluctant so she teleport-drags him on a concert tour right then and there.

Cut to a new scene of Strong Guy fighting Kree-Tor in the middle of a crowd of aliens, chanting for Kree-Tor to win. Strong Guy is victorious, and hires Kree-Tor to be a bounce for Lila on his crew. The Jorken show up in another portal again, trying to kidnap "Lila's big boyfriend" they accidentally nab Kree-Tor because they are idiots.

At that moment, Lila is on stage doing a sound check when a screen appears, telling Lila that they kidnapped "the big human" and wont let him go unless she does their bidding.

Then we switch to the holding cell on the Jorken ship where Kree-Tor is kidnapped through a portal by a myserious brown hand.

Cut again, to Strong Guy setting up the stage for Lila's show, and a crewmember warns him that Kree-Tor was kidnapped, he goes to check on Lila. He runs into another crew member named Rebo who tells him that Lila has gone to rescue Guido, who clearly is right there not needing rescuing.

Then we switch to Lila threatening Tyno trying to make him let Strong Guy (who isn't captured) go, when Tyno's minions come up to let him know that the Kronts kidnapped "Strong Guy"/Kree-Tor and then Lila makes fun of them and heads to Kront World.

Meanwhile, Strong Guy zips to the Jorken Homeworld, in a teeny tiny flying saucer (and dressed like Spaceman Spiff from Calvin and Hobbes), while Lila heads to Kront World. Strong Guy sees Lila and tries to yell at her through the glass of his ship (which turns out to be pointless) and he tries to signal her while she heads straight for the Kront Palace.

Lila crashes her ship into the palace and teleports herself out. Strong Guy can't react fast enough and crashes his ship as well. He crawls from the wreckage and beats on some Kronts to disperse his kinetic energy buildup.

Lila teleports to meet up with him and then they are both captured by the Kront leader, Ulek and placed in energy shackles along side Kree-Tor. Ulek has stolen Lila's watch and threatens to torture them with acid until Lila agrees to do basically the same thing the Jorken wanted her to do. Strong Guy asks him what time it is and he spills the acid he is holding all over himself, allowing them to escape.

They trick the Jorken and Kront into blowing up the moon they are fighting over, and then the two races team up and declare war on Lila and Guido after Lila's show. Guido also agrees to continue touring with Lila.

In the back of the book, there are Strong Guy paper dolls and a connect the dots puzzle.

Retrieved from "https://heykidscomics.fandom.com/wiki/Strong_Guy_Reborn_Vol_1_1?oldid=1454821"
Community content is available under CC-BY-SA unless otherwise noted.