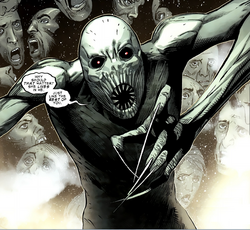 You're mine, now. Your body a puppet that I move as I wish.

Following the Fortress X time, where Legion's personas all had a body for themselves, the return to the normal reality left free six of those sub-personalities outside David's body.[1]

He and the X-Men became aware of that only after having tried to use Time-Sink's powers, unsuccessful, and was informed of that using Delphic's divination powers, revealing the rebellion of six personalities: Time-Sink, Chain, Susan in Sunshine, Bleeding Image, Styx and Endgame.[1]

The six personalities headed to Europe and then split up, Time-Sink staying on Tenerife (Spain), Susan and Chain in London and Styx installed himself in Paris Catacombs, followed by Bleeding Image and Endgame.[2]

A team consisting of Legion, Magneto, Rogue, Frenzy, Gambit and Professor X was assembled to hunt down the rampaging personas for David to reabsorb them into his psyche.[3]

During their operation in London, Xavier was kidnapped by Styx who left a trail for David to follow him in Paris,[4] where he sent his henchman Bleeding Image and later directly in the Catacombs.[5]

Once inside, Styx revealed his plan and goal: In order to ascends as God, he wanted to obtain Moira's reality warping powers. However, he was tricked by David and Rogue, using Chain to duplicate David on Rogue) and was reabsorbed by Legion after a violent battle where Rogue merged into Legion.[6]

Styx sign his actions by leaving a white lily, "for the dead".