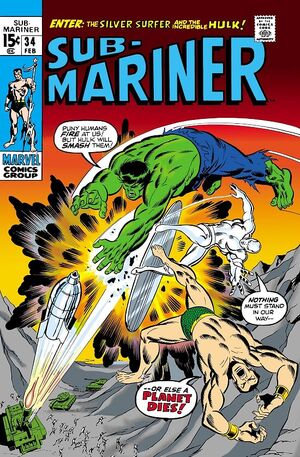 As the Hulk begins to trespass on the land of San Pablo, attracting the army led by its dictator "El General", Namor monitors the conflict. The Sub-Mariner believes that he can manipulate the brute into aiding him in destroying an American device that poses a threat to the entire world.

Also detecting the presence of the Silver Surfer in the area, Namor decides he should enlist the Surfer's aid as well. Going to the Surfer first, the two engage in a brief battle until the Sub-Mariner can explain his situation, and the two agree to work together to stop the humans from destroying themselves.

Going to the Hulk, the three end up battling El General's army, smashing apart his weapons, and defeating his military, allowing the people of San Pablo to revolt and oust their leader. In the aftermath of the battle, Namor, the Surfer and the Hulk fly off to deal with the menace which Namor had gathered them all to stop.

Retrieved from "https://heykidscomics.fandom.com/wiki/Sub-Mariner_Vol_1_34?oldid=1454899"
Community content is available under CC-BY-SA unless otherwise noted.