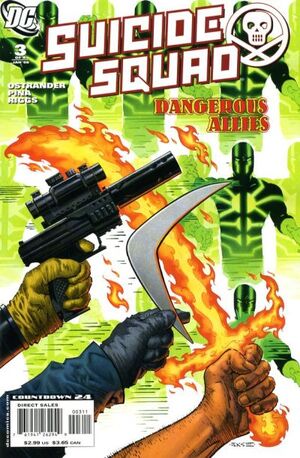 Waller. She finds out everything eventually. She'll find out I'm here. I don't know how, but she will. And she'll come get me. Assuming she's still alive. Assuming I'm still alive when she does.

Rick Flag and Rustam are stranded in Skartaris and are forced to work together. After fighting through a bevy of dinosaurs and other monsters, they come to a temple where they discover the sorceress Jennifer Morgan. No longer requiring the aid of the other, Flag and Rustam have their final fight. Flag proves victorious and strangles his old adversary. He takes Rustam's weapon, the Psi-Scimitar, for himself. Jennifer Morgan opens a dimensional portal that returns Rick Flag to Earth. However, he arrives in the middle of a Quraci military base and is taken prisoner. Flag spends three years in prison until Amanda Waller finally learns that he is still alive and sends the Bronze Tiger to retrieve him. When he returns to the States, he finds that the Suicide Squad has gone through several permutations. Waller asks Flag to re-instate his command of the new Suicide Squad and sweetens the offer by telling him that he gets to go after another old foe - General Wade Eiling.

Retrieved from "https://heykidscomics.fandom.com/wiki/Suicide_Squad_Vol_3_3?oldid=1459297"
Community content is available under CC-BY-SA unless otherwise noted.