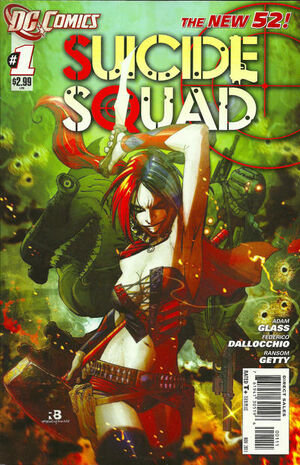 That's just one of the things that landed me on Belle Reve's death row. But how I got out, why I'm working with these chumps...? That secret's part of the job. And it's gonna stay secret unless one of these other jokers crack.

Appearing in "Kicked in the Teeth"Edit

Synopsis for "Kicked in the Teeth"Edit

Deadshot finds himself strapped down while a man in a cloth mask attempts to convince him to give up information by enraging some rats to the point that the bite and gnaw into his chest. Deadshot is a member of the Suicide Squad, along with Harley Quinn, Black Spider, El Diablo, King Shark, Voltaic, and Savant. Each of them is being tortured, in the hope that they will give up information about their team, their mission, and employer. Their torturers seem to be privy to information that they shouldn't know about.

Deadshot thinks back to how he ended up there. He had been on a mission in Gotham City to assassinate a senator, but not unexpectedly, he was set upon by the Batman. The fight caused Deadshot to make his first career miss, with the Batman costing him the kill shot. He had given Batman a shot in the shoulder to remember him by before being locked away on death row in Belle Reve prison.

Meanwhile, the torturers are pouring salt onto an open wound on El Diablo's chest. In the past, he had tracked down some bangers who had stolen from him. When they refused to pay him back, he let loose with a blast of fire on their hideout, which burned everyone inside to death. When he realized that he had also killed innocent women and children in the process, he didn't resist when the police came.

Across the room, the torturers hook alligator clips from a car battery up to Harley Quinn's cheeks, sending shocks of electricity through her body, between her quips. In the past, Harley had tried to prove that she deserved the Joker's love by killing every lawyer who helped put him away, and then dancing with the corpses. On one such occasion, Black Canary had discovered her, and though somewhat sympathetic to Harley's heartache, she arrested her nonetheless.

Black Spider, and Voltaic aren't talking either, and King Shark appears to have died from exposure to heat lamps. As one of the torturers investigates, the shark chomps violently through his captor's arm, grinning and demanding more meat. Nearby, Savant observes the carnage and breaks under the pressure of having hundreds of bugs crawling all over his skin.

Savant explains that they are known as 'Task Force X' on paper, but they are known as the Suicide Squad. When on death row at Belle Reve, their cells were all filled with Kolokol-1 gas, and they were injected with microbombs which could be detonated at any time in order to insure compliance. After weeks of stressful training, they were sent on their first mission: to extract a rogue agent, and bring him back dead or alive.

Half the team went into the cabin where their target was housed. Nearly as soon as they entered, Deadshot had fired a bullet through their target's head. Unfortunately, it was a dummy outfitted with a bomb set to blow in seconds. Those who made it out and those who stayed behind were soon captured, and they all woke up in the torture chamber.

With his story told, the torturer has no more use for Savant, and kills him. The remaining six members are digusted with his failure to keep his mouth shut. The lead torturer declares that they are done, and each of them has a bag placed over their heads (except King Shark, who requires cattle prodding). Later, with the squad gathered together in the cargo hold of a plane, the torturers offer one last chance. They demand to know who the squad's employer is, offering that they already think it is Amanda Waller.

After each of the six agents refuses to give anything up, the bags are removed. A voice comes over a P.A. system and reveals that that they are all now officially agents of Task Force X; that they are the only six of thirty-seven candidates who failed to break under pressure. Deadshot recognizes the voice as Amanda Waller as she gives them their first real mission, which is to take place immediately. They will go to the Megadome in Mississippi, and wipe out the entire stadium; sixty thousand people - all in six hours.

The cargo bay doors are opened, and the Suicide Squad is dropped from the sky, down toward the Megadome.

Retrieved from "https://heykidscomics.fandom.com/wiki/Suicide_Squad_Vol_4_1?oldid=1501330"
Community content is available under CC-BY-SA unless otherwise noted.