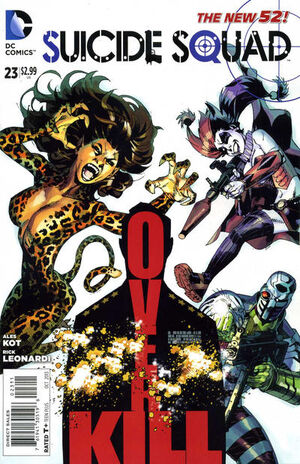 I am going to throw you into the sea now. You will survive. So remember mercy. Find your inner compass.

Amanda Waller has discovered that every problem her Suicide Squad has had to tackle of late was engineered by John Lynch, the former director of her old group, Team 7. She has since learned that Lynch intends to sell a foreign dictator named Paris Mingowee on the idea of its own superhuman team to become his personal security detail.

Some time ago, Waller agreed to remove the nano-bombs from the Suicide Squad's necks in accordance with Harley Quinn's request and or death threat. In addition, they would each be free in a year, acting only as informants from then on.

Now, the squad is in the process of infiltrating Mingowee's compound. While Harley attempts to walk in the front door, Cheetah speeds across the minefield, running faster than the mines' explosions can reach her. In effect, she disables the minefield for those to follow her. Anticipating Waller's moves, though, Lynch sends out his super-team to counter the attack. His call is interrupted, though, by a sudden warning shot from Deadshot's sniper rifle. Quickly, Mingowee's men drag him to safety.

Meanwhile, Harley encounters a woman called Crow Jane, who has counted her bullets, and knows that she's run out. King Shark is accosted by Lamplight. A speedster called Impetus catches up to Cheetah, and Deadshot encounters Amaze.

Lynch grumpily watches as Lamplight is thrown into the sea. Mingowee is hurried into his bunker while Impetus falls victim to the swarm of bees that Cheetah was using as a mine detector. While Crow Jane attempts to use a sonic scream against Harley, the former psychiatrist opts instead to use a pie as her weapon. It is not until the pie impacts with Crow Jane's face that she realizes that the pie's filling is a landmine. Meanwhile, Deadshot has been cloaked with weaponized pheromones to the point that Amaze is all over him. Unfortunately, their intimate moment is ruined by Titan, who tears them away from each other, intending to kill them both. Groaning, Deadshot pleads for her life, admitting that it wasn't her fault she was attracted to him. He follows this plea up with a swift kick to Titan's groin, effectively incapacitating him. With that, John Lynch realizes that his super-team has been defeated completely.

Knowing that she's watching him, Lynch shouts out to Waller, warning that his plans were never just about taunting her. He had greater plans. Regardless, Waller calls an air-strike that blows him to pieces. This leaves only Mingowee in his bunker. Fortunately, tactician James Gordon, Jr. has planned for him as well, secreting the Unknown Soldier into the bunker with the general for a quiet assassination.

On the way home, Deadshot is forced to contend with the fact that his pheromones are having an unintended effect on King Shark.

Retrieved from "https://heykidscomics.fandom.com/wiki/Suicide_Squad_Vol_4_23?oldid=1459326"
Community content is available under CC-BY-SA unless otherwise noted.