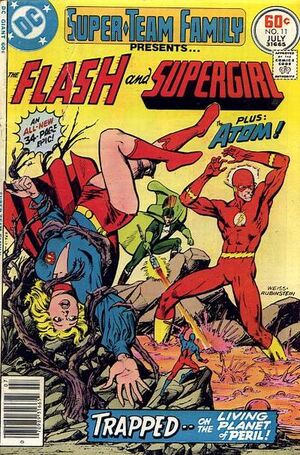 Appearing in "The Other Side of Doomsday"Edit

Synopsis for "The Other Side of Doomsday"Edit

T.O. Morrow has turned up on a living planet which obeys his will, and in order to lure the Flash and the Atom into his clutches for revenge he uses parts of the planet (as humanoids) to abduct Iris Allen and Jean Loring from a women's career symposium at Ivy University, and gets Linda (Supergirl) Danvers as an unexpected bonus. Supergirl, Flash, and Atom eventually defeat Morrow by "knocking out" the living planet. However, Iris has bad news for the Atom. Jean Loring had another nervous breakdown while there, and, empathically hurt by her madness, the living planet threw her into another dimensional world.

This story is continued in the next issue.

Retrieved from "https://heykidscomics.fandom.com/wiki/Super-Team_Family_Vol_1_11?oldid=1496238"
Community content is available under CC-BY-SA unless otherwise noted.