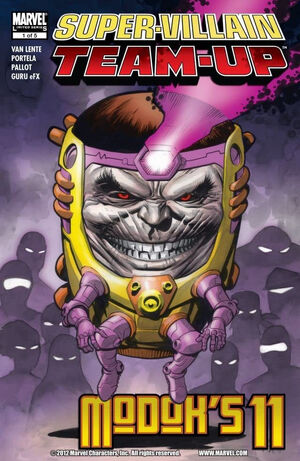 Appearing in "Mistaken for Happiness"Edit

Synopsis for "Mistaken for Happiness"Edit

MODOK is created in AIM HQ, and he immediately kills them all. Later, Modok recruits Armadillo, Rocket Racer, Puma, and Mentallo. These four then go recruit the Chameleon, Living Laser, Nightshade, and Spot to work for MODOK as well. Stress builds inside the team, as none of them know exactly why they were recruited, until MODOK reveals himself to tell them of his plan. . .

The "other" fling which Monica regretted, with a physicist named Bruce, is presumably a reference to Dr. Bruce Banner.

Retrieved from "https://heykidscomics.fandom.com/wiki/Super-Villain_Team-Up_MODOK%27s_11_Vol_1_1?oldid=1730255"
Community content is available under CC-BY-SA unless otherwise noted.