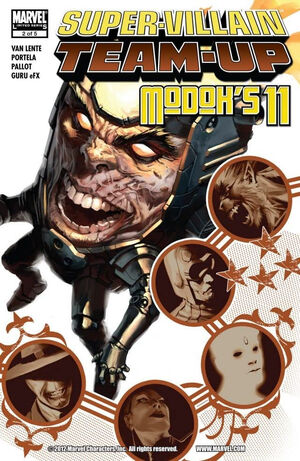 M.O.D.O.K. reveals the target of his heist to his handpicked team of the Most Wanted: the most powerful weapon in the universe, one that threatens the existence of all life on Earth. Meanwhile, Mentallo has figured out that one of M.O.D.O.K.'s team is actually a hero in disguise. Will Mentallo sell the rest of his teammates out to the authorities for some quick cash? Do you even have to ask? Let the backstabbing begin!

The Chameleon contacted A.I.M when he received M.O.D.O.K.'s telepathic summons and negotiated a payment of ten million dollars to have his spot on the team be taken by their Ultra-Adaptoid, a mindless machine with no independent will of its own that is beamed only a few powers at a time from a satellite containing a database of the powers of every hero the Super-Adaptoid ever faced. [1]