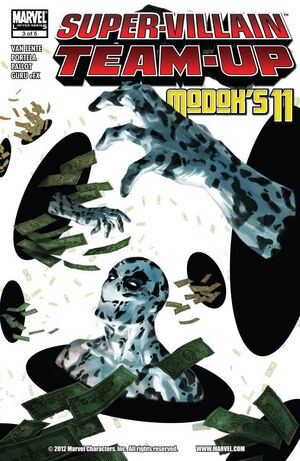 Appearing in "Where The Money Is"Edit

M.O.D.O.K.'s team executes its heist, penetrating the impenetrable fortress of THE INFINICIDE. And it goes off without a hitch! Psych! Actually, no. Pretty much everything that could go wrong does. Another traitor is revealed in their ranks. One of the 11 is stripped of his powers. A heretofore unknown mystery villain shows up out of nowhere to rip off their score. And did we mention the wave upon wave of unstoppable killer androids? No? Well, there are waves of them.

The Chameleon had contacted A.I.M when he received M.O.D.O.K.'s telepathic summons and negotiated a payment of ten million dollars to have his spot on the team be taken by their Ultra-Adaptoid, a mindless machine with no independent will of its own that is beamed only a few powers at a time from a satellite containing a database of the powers of every hero the Super-Adaptoid ever faced. [1]

Spot had contacted The Mandarin using the contact information he had stolen from the Kingpin. He trades the Hypernova for fifteen million dollars, but is sucked through one of his own spots into the Darkforce dimension by the Mandarin who expects that Spot will likely betray him as well.

Retrieved from "https://heykidscomics.fandom.com/wiki/Super-Villain_Team-Up_MODOK%27s_11_Vol_1_3?oldid=1548356"
Community content is available under CC-BY-SA unless otherwise noted.