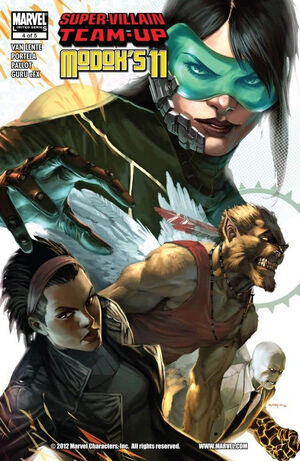 Appearing in "Death From Virtue"Edit

Synopsis for "Death From Virtue"Edit

After barely making it out of the Infinicide's fortress alive, the surviving members of M.O.D.O.K.'s team discover their score has been stolen from them – by the son of the MANDARIN! To make matters worse, Puma has lost his powers, the Living Laser is about to merge with the universe, Rocket Racer can't work up the nerve to ask Nightshade out on a date, and A.I.M. is poised to make its move against them. Fortunately, there's no greater way to foster team unity than to track down and beat the stuffing out of the guy who ripped off the most powerful weapon in the universe from you after you spent so much time and energy stealing it in the first place.

Like Chameleon and Spot before him, Rocket Racer had made a deal to sell out M.O.D.O.K.. But not wanting to break his promise to his mother, he is trying to get the Hypernova to the good guys, S.H.I.E.L.D..

Retrieved from "https://heykidscomics.fandom.com/wiki/Super-Villain_Team-Up_MODOK%27s_11_Vol_1_4?oldid=1729729"
Community content is available under CC-BY-SA unless otherwise noted.