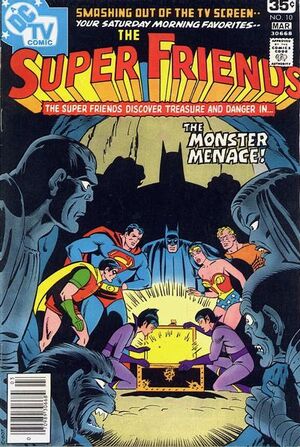 Shape of a tornado!

Appearing in "The Monster Menace!"Edit

Synopsis for "The Monster Menace!"Edit

When the Wonder Twins find a beautiful woman being chased by what appear to be monsters from Earth's movies, they help her escape. She then claims the monsters are pursuing her because she inherited some treasures from her father. The Super Friends then agree to find the hidden treasures for her.

In a cave, Batman, Robin and Wonder Woman battle two vampires, a mummy and a werewolf, and then find a golden ring; at sea, Aquaman and Superman battle what appears to be the Frankenstein Monster, an undead sorcerer with "green magic" and a "fishman" similar to the Creature from the Black Lagoon. Again the monsters are beaten, and the heroes find a golden lantern.

Back at the Hall of Justice, the heroes try to make sense of the events and talk with the captured "monsters" who reveal they are actually alien superheroes that just happen to resemble Earth monsters! The woman is actually an alien criminal named Char Ymat, and the "treasures" are a stolen Green Lantern Power Ring and its battery, disguised with a gold covering. Ymat tries to use these items to escape but is outfought by the alien Green Lantern.

With the matter resolved, the alien heroes then leave for space, with Jayna taking notice on how appearances can be misleading.

Retrieved from "https://heykidscomics.fandom.com/wiki/Super_Friends_Vol_1_10?oldid=1459366"
Community content is available under CC-BY-SA unless otherwise noted.