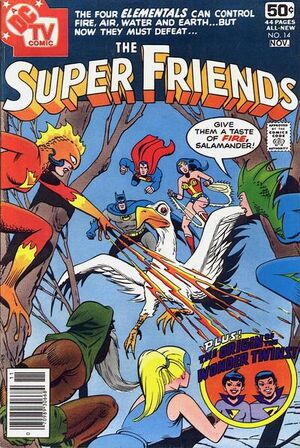 If an exorcist can't help you - try an Exor sister!

The elemental spirits of the Earth take possession of four innocent civilians. Led by an unseen Overlord, these Elementals are duped into performing heroic deeds in the hopes of restoring their lost souls. The Overlord tells them that the Super Friends are actually villains and must be stopped. Each one baits a trap for a particular Super Friend, leading them towards specified dome structures. Aquaman faces an Undine, Superman faces a gnome, Batman faces a Salamander and Wonder Woman faces a sylph. With the aid of the Wonder Twins, the Super Friends manage to convince the spirit elementals that they have been led astray. The spirits, though still housed within their host bodies, agree to cease hostilities against them.

Appearing in "The Origin of the Wonder Twins!"Edit

Synopsis for "The Origin of the Wonder Twins!"Edit

The Super Friends and their new elemental allies relax in the Hall of Justice and listen to the Wonder Twins as they relate their origin story. Zan and Jayna were born mutants on the planet Exxor, each of them gifted with a specified aspect of shape shifting. While still infants, a great plague swept across Exor killing hundreds, including their parents. The twins were raised in an interplanetary circus until such time that they came of age. Frustrated with the enslaved life of a carnival performer, they (along with an elasti-monk named Gleek) fled from Exor and traveled to Earth where they eventually aided the Super Friends in battling the forces of Grax.