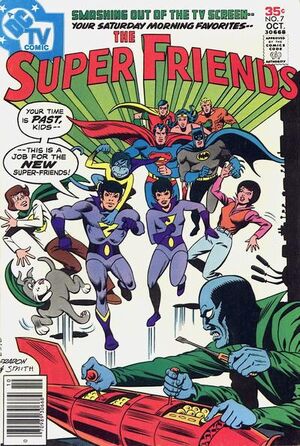 Your time is past kids -- this is a job for the new Super-Friends!

Appearing in "The Warning of the Wonder Twins!"Edit

Synopsis for "The Warning of the Wonder Twins!"Edit

Two aliens, Zan and Jayna, arrive on Earth to warn the Super Friends that they accidentally overheard Grax (and old Superman foe) say he was going to blow up the Earth with bombs he had hidden on Earth's continents. The Justice League then summons several of its members to look for the bombs. The heroes are helped by the superheroes of other countries. Part one of a three-issue story. In this issue, Hawkman teams up with the Native American heroine Owlwoman, Elongated Man teams with British heroine Godiva, The Flash teams with the superfast African hero Impala, and Superman teams with the Israeli hero, The Seraph. They succeed in finding and disarming four of the bombs.

Retrieved from "https://heykidscomics.fandom.com/wiki/Super_Friends_Vol_1_7?oldid=1512652"
Community content is available under CC-BY-SA unless otherwise noted.