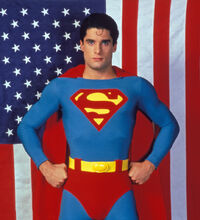 Superboy (later retitled The Adventures of Superboy) was an American television program produced by Ilya and Alexander Salkind from 1989 until 1992. The program aired for four seasons in syndication. John Haymes Newman played the eponymous role of Superboy opposite Stacy Haiduk’s Lana Lang. By Season two, Newman was replaced with actor Gerard Christopher, who continued the role of Superboy throughout the remainder of the series. Although the pilot episode featured a snapshot of life in Smallville, the bulk of the series took place at the fictitious Shuster College in Florida. The series featured several well-known comic book personalities including Lex Luthor, Pete Ross, Metallo and Bizarro, as well as brand new characters such as T.J. White (the nephew of Daily Planet editor Perry White). In 1992, Warner Bros., the parent company of DC Comics, filed a lien against the Salkinds in an effort to maintain licensing control of all of their Superman-related properties. Although Superboy was a Salkind production of a Time Warner property, it was distributed in the United States by Viacom, which later merged with Paramount in 1994. Because of the number of different companies involved in Superboy, and due to legal issues between Salkind and Time Warner that took time to settle, the Superboy television series has not re-aired on American television since its initial syndicated run. Though Time Warner owns all the footage to every other Salkind production of a Superman property exclusively, it shares ownership of the Superboy footage with Viacom/Paramount and Salkind.