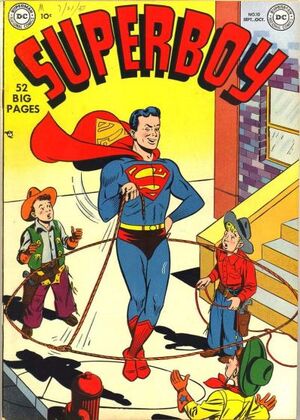 Appearing in "The Girl in Superboy's Life!"Edit

Synopsis for "The Girl in Superboy's Life!"Edit

Shortly after Professor Lewis Lang and his family move next door to the Kents, they ask their daughter Lana to be a house guest with Clark and his family when they go to Africa to collect animals for zoos. While Lana is staying with the Kents, she first begins to suspect Clark is Superboy, beginning a long-running series of attempts to prove the two boys are one and the same. Both become involved in a case in which an ex-convict is wrongly suspected of being a terrorist, and Superboy goes to Africa to help the Langs round up animals so they can come home early.

Appearing in "The Toughest School in the World!"Edit

Synopsis for "The Toughest School in the World!"Edit

Three classmates of Clark Kent’s find phony get-rich-quick schemes when a con man is driven from town by Superboy. They think the schemes are real, drop out of school, and are taught a lesson in expecting something for nothing by Superboy, after which they return to school.

Crooks hold cartoonist Will Ferris, creator of the superhero comic strip Centuryman, hostage and force him to send coded instructions to their boss through his strips, until Superboy manages to rescue him with a daring ruse.

Retrieved from "https://heykidscomics.fandom.com/wiki/Superboy_Vol_1_10?oldid=1524343"
Community content is available under CC-BY-SA unless otherwise noted.