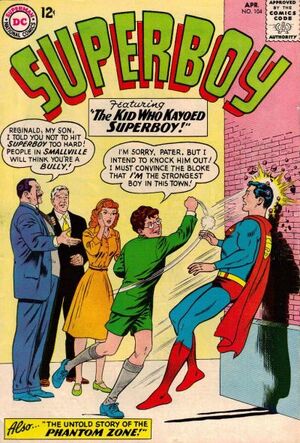 Appearing in "The Untold Story of the Phantom Zone!"Edit

Synopsis for "The Untold Story of the Phantom Zone!"Edit

Jor-El, who secretly serves as Krypton’s masked “executioner”, sends criminal Ha-Kor into orbit in a suspended animation chamber, but cannot make him reveal the name of his gang-boss, Gra-Mo. Gra-Mo is in competition with Jor-El for membership on the Science Council, intending to use his high position for the benefit of his criminal gang. Jor-El wins by his invention of the Phantom Zone Projector, which can exile Krypton’s criminals to a shadowy dimension until their sentences are up. Angrily, Gra-Mo tries to take over Kryptonopolis by seizing control of the robot police, but Jor-El foils his scheme and captures Gra-Mo and his two hirelings. Since the Phantom Zone projector does not work yet, Gra-Mo and his two thugs are sent into suspended animation orbit. In time, Gra-Mo’s prison capsule is knocked to Earth by a meteor, where he and his allies awaken and discover they have super-powers. They present an insurmountable obstacle to Superboy, who is outnumbered by them, and a secret formula has given them temporary immunity to Kryptonite. They attempt to bargain with Superboy for a Phantom Zone projector, with which they intend to release the Zoners, but Superboy tricks them with a phony projector and uses a real one to send the three of them into the Zone.

Retrieved from "https://heykidscomics.fandom.com/wiki/Superboy_Vol_1_104?oldid=1599185"
Community content is available under CC-BY-SA unless otherwise noted.