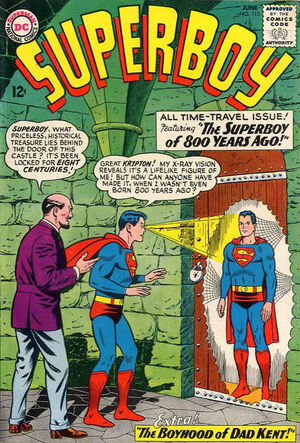 When Jonathan Kent's father constantly reprimands Clark for small offenses, and refers to his own father's disciplinary methods, Superboy goes back to 1900 to do research for a school play about the founding of Smallville High School. There, he observes the young Jonathan Kent and learns that he was indeed raised by a strong disciplinarian...but, when he returns to the present, he learns that the person who raised him was Simon Kent, his uncle, standing in for his father Matthew Kent while the latter was recuperating from wounds sustained in the Spanish-American War.

Appearing in "The Superboy of 800 Years Ago!"Edit

Synopsis for "The Superboy of 800 Years Ago!"Edit

When Professor Ralston uncovers a Superboy robot over 800 years old, the Boy of Steel takes a trip into the past to learn its secret.

Retrieved from "https://heykidscomics.fandom.com/wiki/Superboy_Vol_1_113?oldid=1687776"
Community content is available under CC-BY-SA unless otherwise noted.