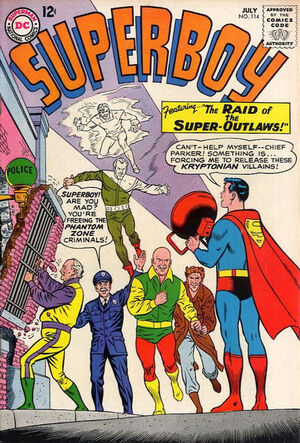 Appearing in "The Raid from the Phantom Zone!"Edit

Synopsis for "The Raid from the Phantom Zone!"Edit

The Superboy Revenge Squad exposes Superboy to Red Kryptonite, making him dream dreams within dreams, which almost convince him he has killed Lana Lang and released the villains from the Phantom Zone. Superboy is on the verge of leaving Earth, when he learns from a calendar page that he could not have done all the things he dreamed of doing.

While Superboy is in the future on a Legion of Super-Heroes mission, Krypto is plagued by the pranks of Mr. Mxyzptlk, but finally tricks him into saying his name backwards and returning himself to the 5th Dimension.

Retrieved from "https://heykidscomics.fandom.com/wiki/Superboy_Vol_1_114?oldid=1687777"
Community content is available under CC-BY-SA unless otherwise noted.