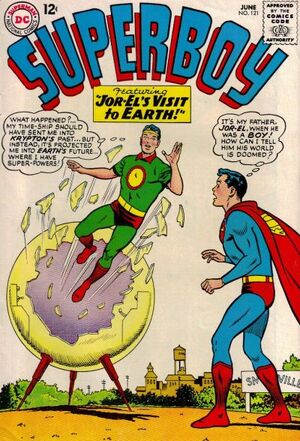 The Phantom Zone villains cause Superboy to lose his powers through an exposure to Red and Green Kryptonite, but, when they bargain for their release in return for Prof. Vakox restoring his powers, he releases only Vakox, threatens him with Green Kryptonite, and forces him to concoct the antidote. After Superboy’s powers are restored, he sends Vakox back to the Zone.

The juvenile Jor-El is thrown through time and space by a comet’s freak effect, ending up in Smallville in Superboy’s time. When he learns the newcomer’s identity, Superboy is flabbergasted to meet his own father, both after the latter’s death but before a period when Jor-El had fathered Kal-El. After several adventures together, Superboy attempts to make a gift of Red Kryptonite to his future father as he helps him return to the past. Instead, he has given young Jor-El a sample of amnesium, which wipes out any memory of his visit to the future.

Retrieved from "https://heykidscomics.fandom.com/wiki/Superboy_Vol_1_121?oldid=1592139"
Community content is available under CC-BY-SA unless otherwise noted.