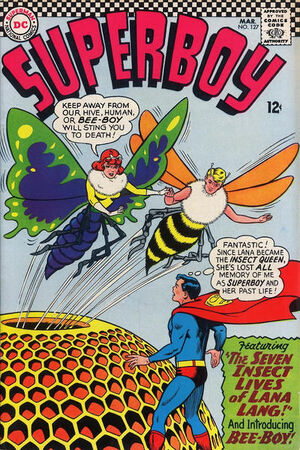 Appearing in "The Strange Insect Lives of Lana Lang!"Edit

Synopsis for "The Strange Insect Lives of Lana Lang!"Edit

When a scientist transforms a boy named Kim into a half-human-half-bee creature so that he can survive a potentially fatal wound, Lana Lang (as Insect Queen) and Superboy have several adventures with him and convince him that life is worth living, even in his Bee-Boy state.

Retrieved from "https://heykidscomics.fandom.com/wiki/Superboy_Vol_1_127?oldid=1592342"
Community content is available under CC-BY-SA unless otherwise noted.