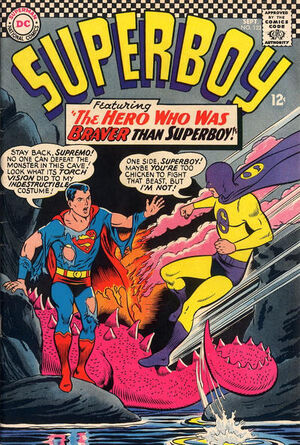 The Space Canine Patrol Agents summon Krypto to help them with a giant show at the Canine-Feline World, with the proceeds earmarked to help fund their anti-crime operations. Their efforts are endangered by the evil Cat Crime Club, who foil Krypto twice and get him suspended from the SCPA. However, Krypto and Chameleon Collie engineer an operation that defeats the feline fiends, and Krypto is reinstated with honors.

Appearing in "The Youth Who was Braver than Superboy!"Edit

Synopsis for "The Youth Who was Braver than Superboy!"Edit

To make young Allan Vale’s last days happy ones before he perishes of a disease, his uncle Jason gives him super-powers through a serum and creates for him the costume and identity of Supremo. Then Superboy, who learns Supremo’s identity, helps out by pretending to be afraid of a “prehistoric beast”, then playing the beast himself in a disguise and letting Supremo beat him. Allan Vale dies shortly afterward, believing he has beaten a monster that even Superboy couldn’t conquer.

Retrieved from "https://heykidscomics.fandom.com/wiki/Superboy_Vol_1_132?oldid=1592135"
Community content is available under CC-BY-SA unless otherwise noted.