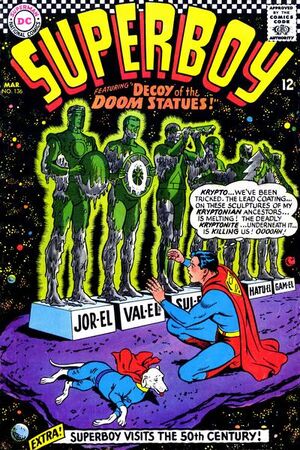 Krypto attends a meeting of the Space Canine Patrol Agents, where applicant Prophetic Pup predicts Superboy will be endangered by a hound, and saved by another hound. After adventures with his SCPA comrades, Krypto and his master Superboy are lured into a trap by the feline inhabitants of the Black Cat World and evil cats in the Phantom Zone, sent there with their masters, telepathically communicating with them. Krypto discovers that he himself is the “hound” who endangered Superboy, but when they are pulled to safety by a young autograph hunter, he learns that the second “hound” is...an autograph hound.

Retrieved from "https://heykidscomics.fandom.com/wiki/Superboy_Vol_1_136?oldid=1614983"
Community content is available under CC-BY-SA unless otherwise noted.